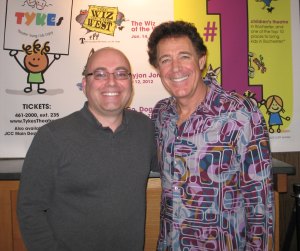 This past weekend I had the thrill of meeting a celebrity from my youth, Barry Williams.  You might know him by his character Greg Brady on The Brady Bunch, or even his alter ego Johnny Bravo.  He was in Rochester to participate in a local production and had a solo show, “Growing Up Brady.”

As someone who watched every episode (multiple times) of The Brady Bunch in my youth, it was personally exciting to meet him.  If you grew up in the 1970s, Greg Brady was someone who most guys wanted to be and most girls wanted to be with.

His local event was a lot of fun for fans of The Brady Bunch.  He shared stories about filming the series, spoke of his relationships with the cast and discussed the various spin-offs and specials that followed in subsequent years.  Additionally, he sang, showed rare home movies from behind the scenes, he taught audience members how to dance like a Brady, took questions from the audience and made time for a “meet and greet” after the event.

Barry Williams unintentionally taught the crowd a few marketing lessons that afternoon too: