The New Year holiday is often a time for reflection and for looking ahead.  While circumstances prevented me from blogging as much as I wanted, I still had a successful blogging year!  Below are my top 10 posts (number of views) written in 2013:

9)  The $209,200 Question  My answer to the question, “What is the skill a graduating senior would need most in order to secure employment?”

8)  We Take Care of Our Own  What do Bruce Springsteen and networking have in common?

7)  The Value Of First Impressions  How first impressions of schools and universities participating in a college fair passed/failed.

6)  The Secret to a Successful Job Search  My answer to the question, “If you had to narrow down all of the various pieces of job search advice into the singular most important thing someone could do, what would that one thing be?”

2)  LinkedIn Policy Is Guilty Until Proven Innocent  This was the most commented on post I wrote in 2013, which criticizes LinkedIn’s Site Wide Automatic Moderation (#swam) policy for group posts.

1)  Recent Examples of PR – The Good, The Bad & The Ugly  In any given week, if you look for it, you’ll find examples of public relations; good, bad and ugly.  Here’s what I found at the time . . .

As 2013 winds to a close, I wish my readers a happy, healthy and prosperous 2014.  Thank you for reading, commenting and sharing my posts this year.  I look forward to sharing my knowledge, expertise and thoughts with you in 2014. 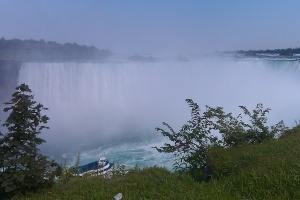 It’s been 50 days since my last blog post.  Fifty!  That’s a long time for me since I aspire to post weekly (or at least 3x/month).  The reality is, summer simply got the best of me.  I was busy with work, busy with consulting, busy with college visitation road trips, busy with networking, busy with public speaking and busy relaxing.  Busy, busy, busy for fifty days!

My unplanned absence from blogging led to an accidental SEO experiment.  Even though my site contained relatively no new content, I had enough blog posts published (77 of them!) that it still produced a decent number of site views.  While the average number of weekly visits saw a small but gradual decline compared to previous months, it was relatively unchanged during that period.  One could argue that a slight downturn in the summer isn’t necessarily unexpected, given vacations and other distractions compared to other times of the year.

So what does this mean?  Can you simply stop what you’re doing, put your feet up on the desk and wait for the phone to ring?  Absolutely not!  My previous 77 posts took time and effort to write.  There was SEO coding that went with it.  The posts were promoted using social media channels and sometimes referred to in comments left on other blogs.  It’s because of that effort my site continued to attract daily visitors to multiple pages.  Imagine how many more visitors I would have had with new postings on a weekly basis . . .

Whether a business, freelancer or job seeker, my accidental SEO experiment illustrates that original content, SEO coding and social media promotion and activity will bring visitors to your website.  The simplest analogy I can make is to gardening…  If all you do is scatter seeds, you’ll probably see some growth in your garden.  But if you take the time to organize what you plant and spend some weekly maintenance on it, you’ll see a bigger return on your (work) investment.

I’ve written previously about the value of first impressions.  A few weeks ago I was reminded about how valuable those first impressions can be.  I had the opportunity to bring my daughter to a local college fair with over 200 schools in attendance.  She did some homework ahead of the event and we had a large list of schools we wanted to speak with.

Upon arriving at the event, what struck me first, was that there was an immediate and obvious discrepancy among the schools.  Some had great signage that was branded consistently with their school.  Other colleges simply made do with what was provided by the convention center.  When you see something like that, what’s your first impression?  Is it that one school takes pride in their brand and another doesn’t?  Or is it something more cynical, such as one school charges more in tuition to support its marketing and promotions budget?

A few of the colleges had more than one representative at the table to help reduce waiting times.  As a parent with many schools on the list and many questions to ask, I found that to be very valuable.  But that begs the same questions, doesn’t it?  Is it “smart business” on the school’s behalf or is it flaunting a larger budget that can afford to send two representatives instead of one?

Many of the colleges had large visuals of campus.  Not surprisingly, all of the students look like models and the campus apparently enjoys nothing but  sunny, blue skies and 70-degree days all year-long.  What surprised me was that some schools didn’t have visuals at all, unless you proactively flipped through their glossy brochures.  You can’t flip through a brochure if your booth doesn’t attract the visitor to begin with!  That seems like Marketing 101 to me, and that doesn’t bode well for the offending schools offering a marketing degree.  I think they need to re-take that class, or perhaps take it at a different school that understands marketing!

My final observation, however, was how few schools had promotional products with them.  I was expecting to bring home enough branded pens to supply a few classrooms with.  Instead, we found one school that had postcards of campus images printed in 3-D and another school that gave out small smartphone screen cleaning pads.

After speaking with 30+ schools, I must admit that many of them blended together at the end of the event.  The ones I remembered either had a great representative, or they had the right combination of marketing and promotional collateral to stand out from the crowd.  For the colleges, isn’t it all about making a great first impression at an event like that?  My daughter was able to eliminate many schools from consideration based on first impressions alone.  The rest will be eliminated on other, more traditional criteria.

A first-impression of my alma matter, the Roy H. Park School of Communications at Ithaca College, overlooking Cayuga Lake (image via ithaca.edu)

Following last year’s Super Bowl, I wrote about some of social media’s impact on the big game as well as the greatly hyped commercials.  I didn’t intend to write a similar post this year, but there were some interesting developments that provided inspiration.

As happened last year, many of the ads were leaked in advance of the game to build awareness and hype.  Did that strategy work?  Perhaps, but it’s often a double-edged sword.  Think of it in terms of getting presents for a holiday or your birthday.  You’re most excited when you first realize what the gift is.  If you happen to find out in advance, that is when the biggest impact is made.  As the chart below suggests, ads leaked in advance didn’t generate the biggest ratings.  Not that this is different than “viewer favorite” polls.

25 Super Bowl XLVII commercials with the biggest TV audiences, according to Kantar Media

Doritos aired spots that were voted on in advance via Facebook.  Another one of the interesting commercials this year was from Coke – not because it was a creative masterpiece, but because it was a two-part commercial with the second spot dependent on audience voting and engagement throughout the evening.  If you’d like a glimpse into a “social media war room” I’d encourage you to read this article from Ad Age.

Beyonce’s halftime show was a spectacle with viewers split on how good (or poor) it was.  These armchair entertainment critics took to Facebook and Twitter to share their opinions, pro or con.  And just as viewers put their cell phones and tablets away to concentrate on the second half of the game, the now infamous power outage occurred.

As CBS scrambled to make sense of the blackout, many viewers returned to social media for their entertainment.  This is when social media surpassed television for the Super Bowl advertising I’ll remember the most.

Savvy brands seized the moment to create memorable social media posts about the blackout, including Oreo, Audi and Tide.  The one for Oreo received 15,830 re-tweets and 5,918 favorites.  That’s phenomenal free exposure that lasted well-beyond the 30-second spots selling for $3.8 Million.

Power out? No problem. pic.twitter.com/dnQ7pOgC

If there were any ads you’d like to re-watch, or some that you missed entirely, you can view them in one spot here thanks to Ad Age.  Which ads were your favorite this year?

I recently consulted with a business regarding their various marketing needs.  One of the topics we discussed was social media.  After our initial consultation, they decided to hold-off on moving forward with social media for a few reasons/concerns.  I hear these a lot, so I thought I’d share them (and my opinion) with my readers.

“I’m not sure it will pay off.”  If you’re expecting an immediate and significant boost in sales by suddenly engaging in social media, you will likely be disappointed.  Social media is more about relationship and community building, interacting with customers and a gradual build.  It’s about sharing and providing something of value.  It’s about the art of attraction.  It’s not a soapbox to promote your business with 90%+ of your posts.

“I’m not sure I’ll be able to generate content.”  Don’t let that stop you! Chances are, if you Google the product or service you sell, you’ll find millions of hits on that search.  Which is a good article?  Which is a trusted source?  Use your industry knowledge and experience to become an information filter for your audience.  That filtering of quality information provides value, builds trust and attracts others.  Over time, it positions you as someone with subject matter expertise.

Is social media right for your business?  It can be, if you use it correctly (or hire someone who does). 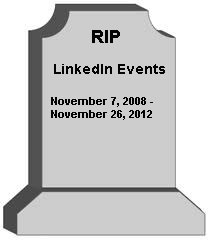 I’ve always felt this was a great feature of LinkedIn and one that not enough people knew about or utilized.  I guess that’s a big reason why LinkedIn has decided to discontinue it.  The application allowed you to create an event and promote it (to social media channels and within LinkedIn to your status update, a group discussion and/or private InMail to your connections).  As people registered for the event, you could see who was attending from within your network and who was attending outside of your 1st level connections who you might want to meet.

During different versions of this application (they’ve tweaked it throughout the years) you could search on events geographically, by topic/industry, by date or by connections.  The events application allowed you to recommend the event to others and to comment on the event.  All of this event-related activity would show up in your network updates feed, which further promoted the event.  Sounds great, right?

Of course, you can continue to promote events through your own status updates and posting into relevant groups as a discussion or promotion thread.  Perhaps they’ll replace it down the road or maybe even partner with another company that specializes in event promotion.

If you manage events, what tools do you use?  I’d love to see a discussion thread for this post with recommended free sites and platforms!  What do you like about the tool you use?